Below, you will find just a few of the bands and duos I was involved with in my 50 plus years in one fold or another. I haven't put them in order and I will add to it as and when I find stuff and get the chance do it. I wasn't much of a collector of stuff from the past, so I have to rely on people giving me the stuff they kept hold of.
HOME
I am starting this band list here and will add to it as I remember them. They won't be in order but I will try to put them in to their right decade. This is to help me really, my memory isn't great.
'70s
Bograt (covers), Memphis T Rock (Rock 'n' Roll), Steam (covers), Mud (Les Grey lead singer),
'80s
Jumpin' Stingrays (Rhythm and Blues), Rio (function Band), Mr. Zero (Rock), Cadillac (Rock 'n' Roll), Skaface (Ska), Layla (Indie) , Al Morocco 5/AM5 (Rhythm and Blues), Up Front (covers), Borderline (country and western).
'90s
Simon Lawrence Jazz Band (Jazz), Y Not (covers), Basie Brothers (jazz), Rockin' Devils (rock 'n'roll), Daz Like Theze (Indie punk),
​'00s
Funky Monks (funk)
'20s
Happenstance (folk),
Jumpin' Stingrays​
Recorded in the 80's 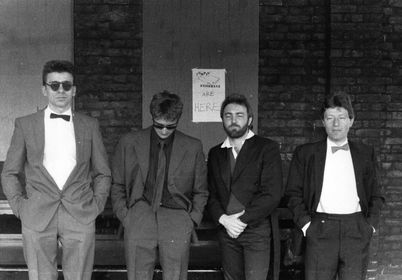 Mr. Zero
No Photos exist at present
Recorded early 80's by Peter Bown of Abbey Road fame.
Peter worked with George Martin and was involved with recording some of the Beatle's music.
These recording were rescued from an old cassette copy, so the quality is poor.

Al Morocco 5
Al Morocco was formed before I joined them. They have had a lot of musician changes over the years and they are still going, but under the name AM5. I was playing with them through many changes and eventually left after a German tour.
Short rare clip of Al Morocco 5 thanks to Tim for rescuing it.
Here's some old live tracks from Al Morocco 5
they were found on a cassette, re-mastered (a bit) and put here for your pleasure.
​Hope you like!

Cadillac started in the early 70's and quickly became popular on the Rock 'n' Roll circuit. They were backing band for many big artists from America, but none bigger than Chuck Berry.          Cadillac backed Chuck for 4 years, playing across Europe.
I played drums with Cadillac for about 20 years on and off, from the mid/late 80's with many personnel changes and backed artists like Wee Willy Harris
(Watch video on YouTube4:31WEE WILLIE HARRIS - WILD ONE - LITTLE BITTY GIRL- DECCA 45 F11217292 viewsJun 7, 2019YouTubed pascalini)
​and Charlie Gracie
(Watch video2:36Charlie Gracie - Butterfly ( 1957 )96K viewsMay 21, 2010YouTubeGoldenOldiesOn45RPM)

Layla was a band set up by Peter Nash, Layla, (my daughter) and me. Peter and Layla would write and record all the tracks, I added some drums and designed the album cover and label. I will add the recordings below as I get them sorted.