And Thoughts
Here is the book that I was asked to write about a friend and fellow musician (Paul Larman) of some 50 years. We played in bands together in my early days as a muso' and again in the latter years of my drumming career. I may no longer perform as a drummer, but I like to think I'm as active now as I always was, in the music industry. 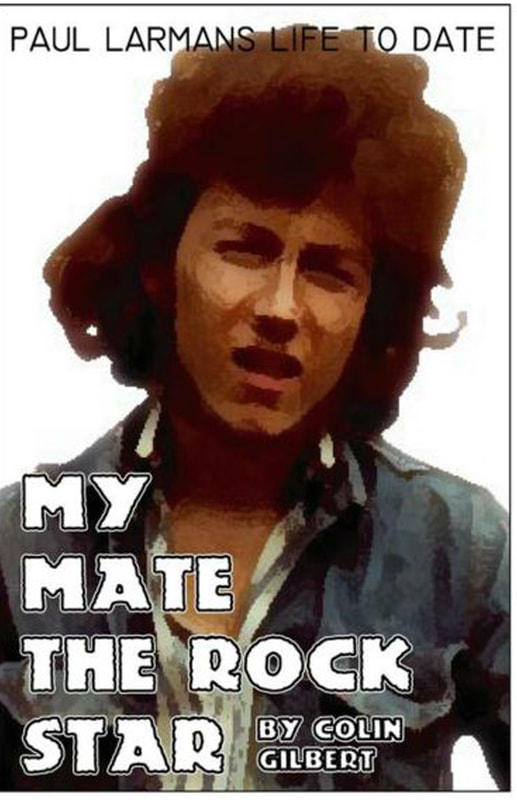 Once again I find myself being woken up by time. One minute I’m happily in the motion of time, then it stops. And then, without warning, it starts again. Luckily, I’m laying in bed when this happens and not on the bus, that would throw out the time table no end, so I assume I must have been there when time stopped. I don’t know how I manage it, but there you go. Time’s a funny old thing.

Many years ago, just after my son was born, I named him after that same robin, I wasn’t allowed to name him before then. I tried to name him first, but the robin must have gotten up very early and beat me to it. The robin is a very angry bird, sometimes the robin follows me around the garden shouting it’s head off or it just stares at me as if to say “wot yeah doin’?”, a bit common is the robin. I stare back and I win the competition, as a rule, then he just storms off in a huff.
I don’t know what the robin is shouting about, because I didn’t do languages at school, but having listened a lot at it’s ravings, I think I am starting to understand.
In the morning, he (or she) seems to be calling all the worms in the ground trying to warn them to be alert. Lerts are my favourite type of worm. The worms are a little deaf, so the robin is very loud and tends to have to do this for a long time before they understand.
They also have a short memory because, by the next day, they need telling again.
The robin might be an angry and loud stubborn bird, but it’s been around a long time. He (or she, cause it’s hard to tell) seems to go to great lengths to follow me wherever I go in this country. I don’t think it likes the sea though, it never follows me abroad.
That blooming bird loves following me just so it can nag, shout and watch my every move in the garden. What have I ever done to deserve that, perhaps it’s because I stole it’s name and gave it to my son and he wants it back.

There are other birds that like to do stuff in the garden too. There’s a bird band that rehearses in the tree at the end of the lawn. They aren’t very good, I don’t think they are the same band as ‘The Byrds’ from the past time long ago. They don’t seem to know the words and they don’t even sing together very well. They argue a lot and split up a lot, so they might be a band from the past.

Before I tell you about my other friend and dog leads (colleagues), I just want to mention ‘old mother time’, that sleeps in the cupboard. Most of the time (question for you – what is time when it’s not?), most of the time luckily (most of my life has been filled with luck, good and bad) I’m laying in bed when time is switched off. However, there was that once when I didn’t exist, about 2 years ago (when I wrote this). I went to this big house of beds where this man jabbed me with a needle in my arm and talked to me until I stopped existing. It seemed to be an eternity of none existence. There was a vast plane of nothing that seemed to stretch out to nowhere. To say there was nothing is an understatement. If you were to take nothing and times it by 100, you would be nowhere near the nothingness. In fact, I was nowhere near the nothingness when it happened, that’s how much nothingness there wasn’t, and that’s an understatement too.
When I returned from not being there in the nothingness of nothing, I found myself where I had left myself, I hadn’t gone anywhere, but there I was none the less (well slightly less, because I just had an operation to remove something. are you keeping up?).

I’ll return to the garden in a jif, but first I would just like to inform you of this guy. I can’t seem to shake him off. I think it’s a guy, it’s hard to say because I’ve never seen him (her). I’ll call him, him, to save ink. I may also refer to him as he too, so watch out for that. He seems to be there every morning waiting for me. As soon as time starts again each day, he’s there chatting away to me. I can’t get a word in upside down. It was him that made me write this daft writing thing you see before you. So don’t look at me with those eyes and say with your mouth, “Who are you talking to”, cos it want be me.
He doesn’t seem to have a name either, I could give him a name, but that would be weird. He does like a good joke, but he doesn’t like me laughing at him, what’s that about.

Now, this garden that lives at the end of our house. It’s full of grass and flowers and wooden things I sit on, under or in or stand on. It has a fence so that none of it can escape. most of it is too big to get through the gate, so that’s ok. But I do like to walk round it and count the flowers each day, just to check none of them managed to sneak off whilst my backs was looking at them (backs can’t see, ha).
A big, slow bent necked, long legged grey heron doesn’t come to our garden. It didn’t come yesterday and it didn’t come today. I don’t think it will come tomorrow, but I will check none the less. I’ll let you know if I don’t see it. He does exist, just in case you were wondering. I’ve seen it not land next door too.

We have these black birds that are black and we have these black birds that are brown. They seem to be chasing each other making this awful din. I don’t know what would happen if one court the other, but I guess they will think of something they could  do.
Just over the back of the garden live a bunch (a pigeon hole of pigeons) of Pidgeon’s that seem to be stuck together with a thread of string. Round and round they fly in a tight pack. They can’t seem to make their minds up either, should we go this way, should we go that way. Landing is a nightmare, “oh no, can’t stop, go round again” they are ‘can’t make a decision birds’, so don’t ask them what they think, that will blow their minds.

In the winter, the starlings decide they don’t want to be birds anymore. They’ve had enough of going around on their own, scratching for food, water, a friendly pigeon to talk to. So, what can they do instead of being a bird, well -
Fed up with being ignored by every pigeon in town, they collectively decide to be a cloud in the sky, not just any cloud sitting happily in the sky like a fluffy kitten that dropped into a bag of flower and fell asleep after eating a balloon filled with helium, no, they want to be a dark cloud in a raging storm, going this way and going that way as fast as they can. Nice to watch, even if it’s a little windy and make my brain go all fuzzy trying to follow their dance.

The other thing I would like to bring to the table and spin it round and see where it stops, cats and dogs, what are they?
I once worked for a dog. I don’t remember going for any interview, but I got the job none the less. My job involved feeding her twice a day, like every day. Not just feed, but water too. The dog went by the name Boo Boo or Boo for short. Loved to take me for a walk on a lead strapped to my wrist so I wouldn’t get lost. She let me off the lead now and then, but I had to sit on the bench while she did the business. I never knew what business she was into, but she made a pile, that’s where I came in, enough said.

Now cats, I’ve never worked for a cat. I’ve heard they have businesses all over town and lots of staff to run them. I’m allergic to cats, but they seem to love me, but I’m too clever to be controlled by them, I just say – cat, be gone and there they sit staring at me, want-ting-lee.

So, there you have it, a life in a day of me and my pondering. Enjoy your leftovers and don’t forget to put out the empties. If you are still reading this, you’re probably asleep, but hopefully not on a bus, especially a striped one.

Good luck on your wanderings, see you at the other end!